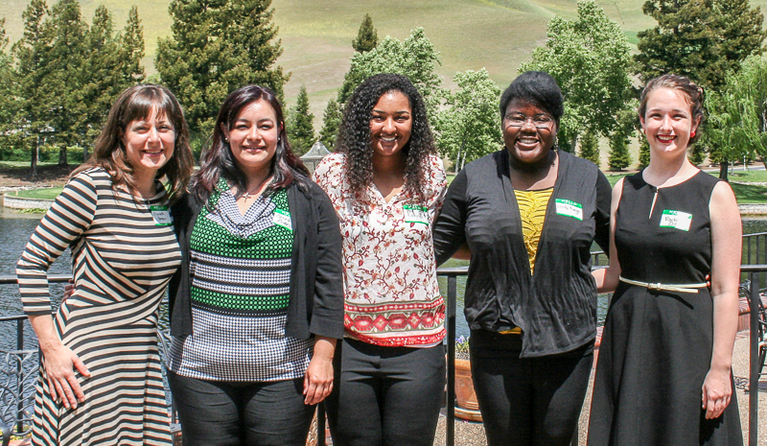 Elizabeth Bowman — "When people ask me why I chose to continue my education pursuing a degree in Nursing, the truth that feels most visceral, that seems to sum up and supersede the many valid reasons I could cite, is that this profession chose me, not the other way around."
After a lengthy break from formal schooling, Elizabeth enrolled at Diablo Valley College (DVC) and has excelled in her coursework, earning commendations from her instructors. She is characterized by them as an excellent role model and mentor. While at DVC Elizabeth has overseen lab duties and provided successful science tutoring support for many of her peers. She is past-president of the DVC Pre-nursing Society Board. Despite the economic and organizational challenges presented by returning to school as a parent of two young children, Elizabeth is focused upon her coursework and eagerly embraces the upcoming challenge of attending Nursing School. She is described by her faculty mentors as one with “deep personal convictions and a strong sense of integrity.”

Carolina Reverso — "I discovered once I put my heart and mind to my goals, I can accomplish many unimaginable triumphs."
​After realizing that her level of education did not afford her the type of impact she would like to have on society, Carolina made a decision to enroll in community college. Currently a student at Diablo Valley College (DVC), Carolina is pursuing a degree in psychology at a four-year university. She plans to conduct research to add to the growing understanding of causes and supports for persons afflicted with mental health diseases. Even though she is a single parent and the sole supporter of her son, following the suicide death of her husband, she prioritizes her time so she can volunteer as an advocate and speaker on the topic of suicide prevention. Carolina is a first generation college student and identifies perseverance as her strongest trait. Faculty mentors at DVC characterize her as “determined, diligent, and courageous.” Carolina plans on becoming a clinical psychologist.

Kailynn Boyd — “At the University of Oregon I plan to study Kinesiology in order to help athletes recover from injuries similar to mine.”
Following a devasting injury (torn ACL) while playing high school basketball, Kailynn’s recovery included focusing in on her future goals. Inspired by her physical therapist and her love for sports, Kailynn began preparing for a career in sports medicine by challenging herself with a rigorous academic load at Alhambra High School. She is the recipient of numerous awards including Scholar Athlete and Most Inspirational. One of Kailynn’s mentor teachers describes her as “driven, determined, and focused.” Kailynn has sought leadership roles, most recently organizing a cancer walk at her school for the past three years. Kailynn will be the first person in her family to directly attend a four-year university after high school.

Cindy Kanga — “My dreams and aspirations are driven by a strong desire to overcome my difficult life circumstances.”
Described as “articulate, determined, and intelligent” by her teachers at California High School, Cindy Kanga is setting her sights on a career in medicine. She dreams of one day participating in Doctors Without Borders to help others struggling with disease and illness. Cindy’s family fled persecution in Angola when she was a child and despite extreme economic challenges here in the United States, Cindy has charted a pathway to academic and social success in high school. She strongly believes in giving back to her community and compassionately reaches out to others around her who have needed help by providing childcare and tutoring assistance. Cindy has also given of her time, talents, and expertise in leadership roles, most recently serving as president of her high school’s Spanish Club.
​
Rachel O’Neal — “I refuse to be thwarted. I refuse to let my future be limited by my past or my present.”
Passionate about volunteer service, Rachel has participated in mission trips to Central America and has also worked for Habitat for Humanity. She plays an active role in caring for temporarily-placed foster siblings in her home. Her volunteer work with Contra Costa Interfaith Housing includes tutoring students who need an extra layer of support. Rachel has challenged herself academically by taking numerous AP classes, captaining her high school’s 2013 debate team (earning recognition for her debating expertise along the way), and leading her class at Contra Costa Christian High School in the role of president. Her high school mentor shares that Rachel is “able to prioritize obligations and still manage to find a way to escape the trials put beneath her feet. Future academic goals include preparing for a career in International Relations and Journalism.